We intend to give you regulary something about the Society in its beginning. It will be based on the first annual report of the Society made in 1905-06. This time, we present the general services (Mother House), the Noviciate Sainte-Marie and the Sanatrorium Saint-Joseph installed in Maison Carrée. 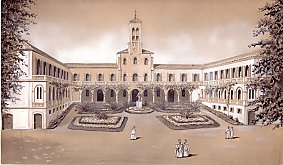 In 1869, Archbishop Lavigerie founded St. Joseph’s Orphanage at Maison Carrée. The following year, the Mother House was established there with the Novitiate. The foundation stone of the chapel was laid on the 21st July 1873; consecration of the chapel, dedicated to the Sacred Heart, on the 29th October 1874. Consecration of four side altars was performed in May 1875. Blessing of the Stations of the Cross paintings took place on the 19th March 1880.

All the ordinary Chapters of the Society took place at Maison Carrée, except the first (1874, at O.L. of Africa), as well as various other extraordinary meetings chaired by our Venerable Founder.

The Brothers’ Novitiate was then at the Mother House. After an unhappy trial at the Maison Rostan, under the direction of Fr. Keller SJ, (1869-1870), the Brothers’ Novitiate was installed at Maison Carrée (October 1870) along with the Brother Clerics. It would remain there until 1878 and was directed in succession by Fathers Ducat, SJ (1871-1872), Gras SJ (I872 - October I873), Lévesque, WF (1874), Chevalier, Levasseur, Moncet – transferred to Saint-Martial (Attafs) 1878, under the direction of Fr. Derevier, then Fr. Hirth. It returned to Maison Carrée in October 1882 and was entrusted in succession to Fathers Leroy, Gerboin (I883-I890) Girault Ludovic (I890- 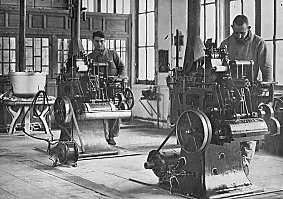 Five (Brother) Coadjutors ordinarily worked at the printer-binder shop. This workshop gave work to a variable number of Kabyle employees.

The various services of the Mother House included:

In 1907, the personnel of the Mother House comprised: Bishop Livinhac, 13 Fathers and a variable number of Coadjutors, 27 novices: seven of them arriving from Marienthal and Boxtel, were clothed with the habit on All Saints. It was known that from then on, the Brothers’ Novitiate would last two years instead of a year and a half.

The Mother House was not large enough to accommodate all the cleric and coadjutor novices. They had to build a special house for the Clerics Novitiate. They entered the new Novitiate (Sainte-Marie) on the 27th April 1899. The chapel was not built until 1901. Besides the novices, the personnel included 3 Fathers: the Novice Master, the Bursar-Director and a Professor: 5 Coadjutors provided the services in the house.
The Chronique of January 1907 (n° T34) published a diary-report on the 1905-1906 Novitiate. It would be enough to indicate here that 43 new novices arrived at the end of September. At the time of writing, some had already gone back home to their families. 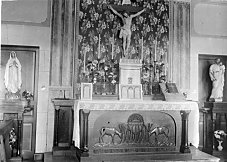 In 1870, the Cardinal had a house built at Maison Carrée called ‘La Délégation’. In 1894, the enlarged and modified ‘Délégation’ became the Sanatorium. In 1906, four confreres passed away at the Sanatorium. All succumbed to tuberculosis. There was an average of 10-15 people in the Sanatorium, including the three Coadjutors.