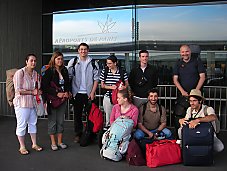 Everything began by chance, at least for me. I have been working part-time for a year in the Archdiocese of Lyons, particularly in two areas: pastoral activity for youth and missionary cooperation. In addition, it is about offering the possibility to young people who want to access a long or short-term missionary experience, a trip for three weeks in August, organised by the Missionaries of Africa (The White Fathers), definitely not for tourists!

Stage One at Mours (40 kms from Paris)

At Mours, people say, 'The God of Love is here', punning on the words, 'à Mours' and 'Amour', French for 'love'. The young people took it on board with enthusiasm. It was indeed a special experience of God's love, as we spent two days getting to know one another, then to become immersed in the subject, before taking off for Niamey, Niger Republic, Africa. A super-intensive course to learn Hausa was undertaken, imagine, just to muddle through on arrival and give a good impression!

This was the group: one Polish White Father Missionary, our expert guide, then me, as a missionary volunteer and finally 4 young women and 3 young men. Most of them students, they came from France, Poland and Italy.
The purpose of this trip was to discover a people, different in their way of life, beliefs, and ways of doing and seeing life; to be close to the local community, a foretaste for an impending major departure in the area of humanitarian aid and finally, to discover oneself and others. 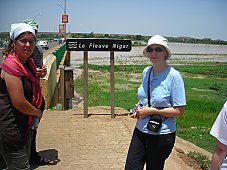 Culture shock is often mentioned when arriving for the very first time on another continent. Well, we had three days of quiet immersion in the discovery of this great multi-ethnic capital, where many people, especially the younger generation, seek a safe haven to try their luck in continuing their studies or seeking part-time or permanent jobs, so to speak. 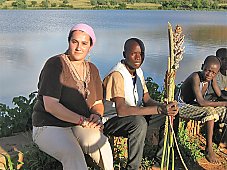 A country of 14,000,000 people with a high rate of population growth, it has doubled in the last 25 years. The countryside and the climate are like other countries of the Sahel; all the north is almost desert, but the long River Niger flows through the extreme south-east of the country. The predominant religion is Islam, 98%, with Catholics barely 1%. 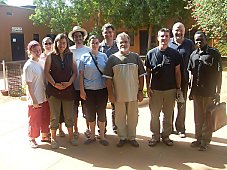 Long walks in the various neighbourhoods, visits to historical and religious sites (the Cathedral and the Grand Mosque) the immense fixed markets, the daily life of the people and above all meeting with the Bishop and the missionaries, who have been in this vast Niger territory for a long time, enabled us to have an insight into a new world, completely unknown to any of us.

After this brief 'accelerated initiation', our group split up into smaller units. One went in the direction of Birnin Konni, the other towards Zinder. We were all together on the road to travel a very long route, in a coach numbering 70 adults, apart from the driver and his 'technical team', in case of breakdown. Then, as it says in the Gospels, 'without counting children', since babies were still being breastfed by their mothers! 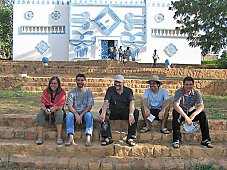 That's it! We are in the hinterland and therefore other discoveries are waiting for us. We were installed at the mission, super welcome from the youth of the locality, a programme was set up with them, then on with the show. There were visits to the town, local radio, Christian families, cultural centre, hospital, rural village community, as well a stroll on foot into neighbouring Nigeria, not to be confused with the Republic of Niger. We discovered many humanitarian activities in the areas of adult literacy classes in local languages, school teaching and women's advancement programmes. 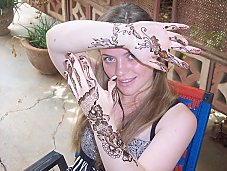 There were many interesting and rewarding discussions on several topics during the meeting with young Muslims. There were times of prayer and the celebration of Sunday Mass with the Christian communities. To conclude, the young women had tattoos done on their arms; there was a football match with the young men on the main pitch and a dance evening for everyone to a scorching Made in Africa, Afrique or even Afrika beat! In fact, it was very hot in spite of open windows and the whirling ceiling fans of the huge hall!

We left by coach, but a day late. The reason was there were no seats for the four of us, despite having bought the tickets in advance and booked in our backpacks… and all this because we had to give priority to the unexpected last-minute football team that day! 'Yi hakuri!' - 'Be patient' or 'Yi hakuri ma na!' - 'Be very patient!' 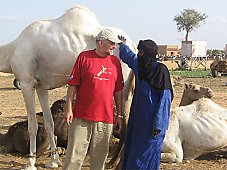 The programme was more or less the same as before, but each place and mission post is always different and above all, unique. They presented the various activities headed by the missionaries at the service and well-being of the people, with religions and beliefs combined. The new features, by contrast to Birnin Konni, were a visit to the new school, dispensaries (vaccination and treatment), a maternity ward, a centre for the screening and care of leprosy, the site of the great Sultanate, the ancient historical centre with its characteristics: narrow side-streets overcrowded with children, who sprang from everywhere, a weekly cattle market (chickens, donkeys, horses, goats, sheep, cattle and above all, camels.) 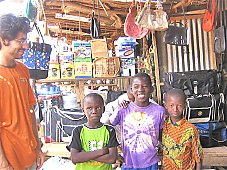 Finally, we had a major outing with the youngsters in the Toyota: three in the driver's cab and twenty-one behind, in the open and therefore uncovered, some seated, some standing, with super singing and loud jollification. In short, it was the incomparable trade mark of planet-wide youth today and… what is more, thank goodness! Long live life! 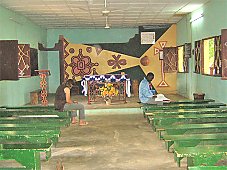 On the way, still in the Toyota, we had a narrow escape and only just, from a raging and violent storm; we found shelter with the uncle of one of the twenty-one youngsters, the proprietor of a bar. We all had a large glass of water each and in addition it was free, on the house. What luck!

To complete this stay, we had a grand Sunday celebration, a picnic shared out in bowls, exchange of addresses, emails and mobiles, followed by votes of thanks, in turn, from the young people, those remaining and those leaving.
" Sai wata rana ! " (Till we meet another day!). Such is life!

Stage Five at Niamey 2 …the return, just like in films!

This time, the Zinder group had to prove their mettle: 937 kms to reach the capital. Turn about, as we said! Rising from the sleeping mat at 4am, a quick coffee, pack, check-in the luggage, long wait and then at 6am we leave, arriving at our destination at 21.30. What a pleasure to meet the other group and finally all eat and drink together! The following day, we did our final shopping for typical and exotic souvenirs, everyone to their own taste and above all in function of the money left over in our pockets! 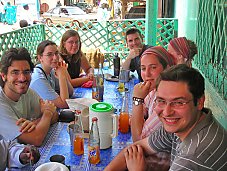 Everyone haggles - 'Nawa nawa ne?' 'How much is that?' - all in the belief of making a profit, while the vendor, all smiles, says, 'Kawo kudi!' 'Pay the money!'
Finally, we meet for a last meal together in Niger territory, by the side of the River Niger, preceded by a very rewarding sharing of our impressions as a group and as individuals. We all agreed it was well worth making this trip and to live this experience. The initial culture shock gives way to the desire in me to return alone, but for a longer time, and in a humanitarian context at the service of these people, who welcomed us so well and enriched us so much.

At Niamey, I met a Senegalese Sister and moreover, of the Seereer ethnic group, but who is a missionary in Niger. It is true, it is really a small world, since I was a missionary in her country among her own people! She is in her forties, not from the Roaring Forties, and ready to fly out on her first journey to Europe. She asked me to help her with the formalities, and on arrival.
At 23.50 on the 26th August, the plane takes off, leaving the soil of the capital of Niger, then lands in the French capital. At 6.05am, we arrived at the CDG Paris airport, but it is already another day, the 27th August.

The Sister, just like our young people during the flight to Niger, is also faced with the unavoidable phenomenon of culture shock in reverse! There is a world of discovery out there! Will she receive such a warm welcome in this world, supposedly so open and ultramodern?

We reclaim our luggage and backpacks and then we plod along the never-ending corridors, up and down escalators and finally we are faced with an immense crowd of travellers, who arrived before us.
We move at a snail's pace, one after the other. The path is obligatory and marked out, similar to a game of snakes and ladders. People become impatient, as they have to count more than an hour to reach the police counters for immigration control.

I leave the Sister, as our paths separate. She take the direction 'Passports from outside the European Union.' I take the other one, 'European Union Passports.' When my turn comes, the formalities are quite swift. On the side of 'Passports from outside the European Union', the formalities take longer: questioning by the police officer, replies from the passenger, re-checking of the passport and visa in due and proper form and for the first time, an electronic biometric measurement in fingerprints to identify someone, just in case…

Ultimately, I meet up again with the Sister, telling her, 'You see, here, it's not up to much! Welcome to Europe! You will see, it is quite another world!' I catch up with the group of young people and we have a French coffee, before splitting and hoping to meet again soon at the post-Niger meeting.

I express my thanks to our Polish White Father guide, 'Na godé!' (singular form) and to the young people of the group and the people I met in Niger,' Mun godé!', (plural form.)

See also: Niger : Journal of the trip to Niger with the group of the European youth in Niger
Project Africa 2008