‘The first difficulty comes from the climate, journeys and the various condition of material life which puts greater or less stress on European constitutions. We are deprived of most of the home comforts we have been used to since childhood: bread and wine are often lacking.’ 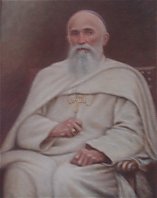 It is true that many changes have taken place in Africa since the sharing out of the interior by the European powers. Other than that they afford relative peace and security almost everywhere, they also organise the means of transport. On some major routes even now communications are guaranteed and even quite rapid. However, make no mistake, the daily life of the missionary, particularly in the early days of setting up, consists of fatigue, disagreements and privations. These difficulties are a considerable attraction for generous souls and I congratulate you in foreseeing this prospect fearlessly. Later, the attraction will give way to joyful and sustained perseverance.

‘Besides material hardships, there are others definitely more uncomfortable for the Missionary. Indeed, it is always a tough long-term enterprise to change a people and lead them from error to truth, from barbarity and vice to civilisation and virtue. If therefore the missionary arrives with the all-too frequent illusion for generous natures by thinking he just has to show himself to attract all those who will listen to him, to speak with them to convert them, then he will soon come up against disappointments that can land him in discouragement. For this affliction, there is only one remedy: the support of God sought through prayer and the firm conviction that what is asked of the missionary is not so much success as fidelity to his holy duties. With this, we can fight the good fight of which St. Paul speaks. Even if throughout our lives we will only have saved a few souls, we receive from God the same reward as the Apostles, who, thanks to the gift of miracles, were able to convert the multitudes.

However, I must add that in all these sufferings there are compensations, some of them a hundredfold. Though African life is hard from several angles on the material side, it is captivating in lots of others. Those who have seen the pure African sky with its brilliant luminosity, all it affords of majesty and charm, cannot detach from it again. The high plateaux of the interior are remarkable in fertility, grandeur and the essence of wholesomeness. Recent explorers agree that there is no country more rich or admirable under the sun. Spiritually, the harvest in Equatorial Africa in particular promises to be very abundant for the preachers of the Gospel. If therefore the litanies of drawbacks I have just listed are frightening, the consolations are also very great, and we can say with St. Paul, Superabundo gaudio in omni tribulatione nostra.

As for the rest, it is truly this inner joy that comes from suffering itself endured for the love of Our Lord, of being conscious of working for the spread of his reign in others and in self that gives a superior character to the missionary vocation over that of a priest in Christian countries. His life, his outlook, his inexpressible hopes are quite other. If he has trials to go through, he has at least great things to accomplish. If he suffers material deprivation, he is unaware of the little bothers, boredom and vulgar worries that too often assail a poor priest in our European parishes. At times, he may slacken in enthusiasm, no doubt; at least he has the joy of knowing within himself that one day he made the heroic sacrifice of himself to God of all he held dear, in his habits, his affections and even his life. He knows he works for a master who is never outdone in generosity.

Since we are dealing with this matter of the spiritual advantages proper to the apostolic vocation, you will not mind us insisting on the support that community life affords in this respect. Just now, we were saying that it obliges us to relinquish our preferences; in exchange, it removes the dangers of isolation. In effect, this is what is prescribed in our Rules:

‘Never, in any case or under any pretext whatever are Missionaries to be less than three together: Fathers or Brothers, in their various residences. Rather than break this rule, we will refuse the most beneficial or urgent offers and would rather sacrifice the Society than this key position.’

‘As life in common is a fundamental law of the Society, Missionaries together perform, under the responsibility of the Superior or his replacement, the spiritual exercises of the day, namely, morning prayer with meditation, particular examen, spiritual reading, visit to the Blessed Sacrament and evening prayer with general examen.’

Our Venerable Founder concluded in these words: ‘Firstly examine carefully whether God is calling you interiorly to the apostolate. This is the prime condition; for if you are only giving way to some frivolous flight of the imagination, if you are only looking for a means, more in keeping with your personal tastes, to spend the activities of your youth in extraordinary undertakings, question yourself in depth and do not put yourself in harm’s way, where the life of your soul would be perhaps just as prone to risk as that of your body. However, are you strongly determined to sanctify yourself by patience, suffering, and the total sacrifice of yourself in blood, if required? Then come, you will certainly find in Africa, as well as anywhere else in mission countries the means to make your life useful for the glory of God.’

Do not decide anything before prayer and due reflection. St Paul says that called by God, ‘he consulted neither flesh nor blood.’ You will not neglect to take into account what the Law of God imposes on you as regards duties towards your parents. Nevertheless, ponder this matter and take advice from a wise director.

You may be worried about the necessary qualities: health, talents and the rest. Apostolic ministry presupposes a good physical condition, but does not demand what is known as an iron constitution. It is much more important to have a thoughtful character, firm and cheerful. I have already spoken of the languages to learn. I would add that we do not succeed without discretion, prudence and tact, which is expected, even if Africans do not know of our own courtesies, for they do not lack sensitivity or even finesse. However, above all, what is required is great kindness and patience founded on faith and zeal. Our Constitutions state, ‘Missionaries must become all things to all men to win souls for Jesus Christ and his Church and must not back away from any pain, even the pain of death, in matters of extending the Reign of God.’

With the exception of the Rosary, the Brother Coadjutors wear the same costume as the Fathers. Nevertheless, outside chapel, they replace this with a hooded tunic falling to the knee, and decorated with a red cross on the front.

Their admission is under the same rules as those indicated for clerics. However, admission presupposes a six-month postulancy before the Clothing and a two-year Novitiate before the Oath. Brothers take the same commitment as the Fathers, but their Oath is only temporary for a total period of six years. To the Oath of stability and obedience, they add that of chastity.

The Society looks after all their needs without exception. Sharing the exercises of common life with the Fathers and associated with apostolic work, they have its advantages and merit before God.