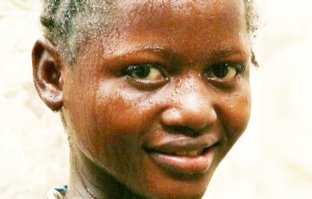 
The work of maids in town

In Africa, children, especially girls, work in households for cleaning, cooking, collecting water, baby sitting, and caring for the elderly. These tasks can be viewed under two aspects. When performed in reasonable conditions and under the supervision of relatives, they can be seen as part of family life and the process of growing up. If they are not in a family setting, they can become a form of exploitation. 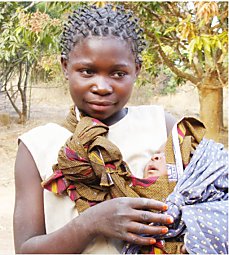 Little girls working as maids or domestic workers are not only found in all the cities of sub-Saharan Africa, but they can be found in North Africa as well. The magnitude of the phenomenon has, up to now, being largely invisible, but it has suddenly become a serious social problem in many developing countries. It has huge moral implications and demands a strong response.

Exposed to many different dangers

The little maids are exposed to many different dangers in their work. Over and above the long and hard working day, they may have to use toxic chemicals, carry heavy loads, and handle dangerous objects such as axes, knives and hot utensils. They can also suffer because of inadequate accommodation, insufficient food, and humiliating and degrading treatment, especially verbal and physical abuse including sexual violence.

Part of the abuse suffered by these young workers is lack of rest. They are starved of affection and live isolated lives, which results in inhibitions and lack of trust. The fact that the whole family may constantly insult them warps any self-esteem they might have.

Girls involved in selling items on the street, are left to fend for themselves. They may get involved in occasional prostitution in order to supplement their diet, buy clothes, things that are not provided by their employers. Living on the street might be preferable to escape the bullying in the house.

However, the street also gives them ideas about acquiring prosperity as quickly as possible, reinforced by the social myth of getting wealthy at all costs. Even if there are unfavourable economic conditions, the girls are vulnerable because of their desire to get clothes, shoes, and food.

Why become a maid ?

In African culture, the child belongs not only to the parents but also to the clan. A child’s education is not only the responsibility of the parents but of members of the tribe as well. Children may be sent to live with a widow or a childless aunt, or an uncle or a cousin living in a big city, as a sign of solidarity or to seal an alliance with other members of the clan. Girls from rural families who are sent to the city are considered very lucky in this scheme of things. There is a hope they will receive some sort of education to prepare them for the future. 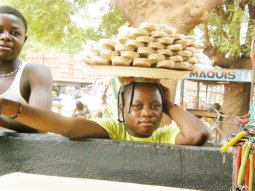 Agreements are often made between women who then make a proposal to the father. He can be easily persuaded to agree, as it reinforces family ties with other members of the clan. A refusal could cause relationships to deteriorate with other relatives. The child can consider it as an escape from the chore of helping the mother with the constant demands of housework. In many villages, the oldest girl is not allowed to go to school. When she is born, the mother is delighted because she will get some help in the house later on. This attitude is often due to poverty, illiteracy, and poor infrastructure in rural areas.

Young girls can be attracted to this type of situation because of the increasing social and economic disparities, which can also fool people into thinking that the employer, as an extended family member, will provide a protective environment for the child. It also meant that the woman of the house has a housekeeper, which will allow her to go out and earn some money. There is also the illusion that domestic work is somehow educative and prepares a girl for the future.

Responsibilities of the authorities
Morocco has a law that prohibits the exploitation of young girls less than fifteen years of age. Nobody respects this law and in addition, it does not cover domestic workers so that this law does not protect the little maids. Many employment agencies who find work for girls coming from rural areas are legal. They promise that the girls will be treated well and will be paid by their employers. However, they are often human traffickers who do not respect any of the promises they have made. Nevertheless, governments have made great efforts to improve the situation of the maids.

The state must ensure that:

Laws prohibiting the employment of children less than 15 years are rigorously enforced and that controls are created.

Prosecute employers who knowingly employ children under the minimum age;

What are the alternatives?

In order to minimise the effects of this scourge and in the event of not being able to completely wipe it out, education programmes highlighting human rights for all the people involved in the process, parents, teachers, employers, the girls, authorities, institutions and rights groups need to be made available. It is only by educating families, integrating children into households, media awareness and making the legislation regarding the protection of children more widely known that we will be able to move things forward to protect children.

It is hoped that all this will make people aware of the practice, very close to slavery, of the exploitation of young girls in towns for a pittance of a salary.