ROME : IN THE FOOTSTEPS OF LAVIGERIE

Note: These pages give the dates of Lavigerie's visits to Rome and, where possible, the reason for the visit and the places where he stayed. During each visit he had an audience with the Holy Father and with certain Cardinals, but it has not been thought necessary to make special mention of all of these here.

- 21/12/1860: Reverend Father Lavigerie, director of the Work for the Schools of the East, returned from Syria where he had gone to distribute charity. He passed through Rome, was received by Pope Pius IX, and on 25 August 1861 he was appointed an Auditor of the Rota.

- 30/10/1861: He took up residence in Rome, in the Palazzo Savorelli, in the Piazza degli Santi Apostoli. Mgr Baunard says of this palazzo that it had a modest façade, on the opposite side of the modern Via Nazionale.

- 22/3/1863: Ordained Bishop in St-Louis des Français, having been appointed Bishop of Nancy on 5 March.

- 11/6/1867: Goes to Rome for the Centenary of the Apostles Peter and Paul. He stayed at the Hotel dei Condotti (Via Mario del Fiori 37), not far from the Piazza di Spagna. He took part in the grand celebrations in St Peter's and then, on 30 June, in St Paul's Outside the Walls. He had a lively confrontation with a police officer during a traffic jam.

- 23-28/7/1868: Gave a report to the Pope on his efforts for religious freedom in Algeria, and also spoke to him about the Sahara-Soudan, of which he had been appointed Apostolic Delegate on 6/8/1868.

- 6/12/1869: Arrived in Rome for the Vatican Council. He stayed in the house of a certain Scatigi, in the Via del Pogetto, near the Piazza di Spagna. It no longer exists. Lavigerie was a member of the Conciliar Commission for Missions and Oriental Affairs.

- 21/11/1870: Baptism of two Arab children by Cardinal Bonaparte in the church of Trinità dei Monti, in the presence of Archbishop Lavigerie.

- 17/1/1870: With the Pope's permission, Lavigerie went to Paris to settle certain questions about schools.

- End of March 1870: Left Rome with the consent of the Pope. The importance and urgency of his African affairs would not allow him to stay away any longer from his diocese.

- 1/1/1871: In Rome to discuss the problems of the diocese of Constantine, of which he had taken over the provisional administration after the resignation of very ill Bishop de Las Cases. Lavigerie remained in Rome until 7 August 1871.

- 28/8/1872: Staying in Rome in the Hotel Minerva, Piazza della Minerva 69, a good hotel with three hundred beds. Meals for 6, 22 and 27 lire. The nineteenth-century guide says it caters for ecclesiastics. Fathers Deguerry and Charmetant are with him, and Lavigerie introduces them to the Pope. He left Rome on 2 September.

- 5/5/1875: In Rome with Fathers Deguerry (Vicar General), Charbonnier (Assistant) and Bresson, with three Arab children. Lavigerie introduces them all to the Pope on 13 May. The Pope was delighted and gave Lavigerie a silver medal engraved with his head, saying, "I always remember you, and I hope that you remember me." Lavigerie left Rome towards the end of May.

- 21/7/1877: Lavigerie comes to Rome to talk about Jerusalem and Equatorial Africa. He leaves at the end of July.

- 21/5/1878: Lavigerie left Paris for Rome before leaving for Jerusalem on 2 June. He made the acquaintance of the new Pope, Leo XIII, and said of him: "He is a man, he will be a great Pope."

- 6/9 - 16/9/1879: The Church in France was attacked by Freemasonry and Atheism. Lavigerie had talks with the Pope about it. In Paris he had seen Jules Ferry and other members of the government.

- 27/5/1880: Arrived in Rome from Malta, via Messina. He talked with the Pope about Malta and, especially, about the Congregations not authorized in France.

- 22/7/1881: Arrived from Malta where the Institute for the training of African doctor-catechists had been set up. He spoke about this to the Holy Father and left at the end of the month.

- 3/7/1882: He received the Cardinal's Hat in the consistory. He took possession of his titular church, St Agnes Outside the Walls, on 4 July and left on 8 July for Malta. This Church still has his portrait.

- 18/4 - 12/5/1883: Cardinal Lavigerie officially brought before the Holy See the question of the restoration of the Archdiocese of Carthage. He had been its administrator since 28 May 1881.

- 19/6/1884: He stayed in the Hotel Costanzi (?), near the Piazza di Spagna. He celebrated Mass in St-Louis des Français for the repose of the soul of his old friend, Bishop Henri Maret; attended two meetings of the Congregation of Propaganda on 23 and 28 June. He spoke to the Pope again about the restoration of the See of Carthage.

- 10/6 - 21/6/1885: Lavigerie spoke to the Pope about the confiscation of Church property in France. He took possession of the church and the French establishment of Saint-Nicolas des Lorrains.

- 20/4/1887: Our Founder spoke to the Pope, among other things, about the White Fathers and White Sisters.

- 17/5/1888: Arrived in Rome with the African pilgrimage and launches the anti-slavery campaign. On 24 May, three young Kabyles are baptised by Father Lechaptois, in the presence of Cardinal Lavigerie, in the church of Saint-Nicolas des Lorrains.

- 19/12/1888: Arrived in Rome and sees the Pope several times. They spoke of the anti-slavery campaign. The Cardinal spoke to the Ladies of the Cenacle in Rome and gave a conference in the church of the Gesù. It was during this conference that he quoted the Roman poet Terence: "I am a man, and nothing human is foreign to me." During this visit he stayed at the Hotel de Londres, Via Collina 23, not far from the Via XX Settembre.

- 8/10/1890: Arrived in Rome with Bishop Livinhac and fourteen young Ugandans who were on their way to Malta to be trained as doctor-catechists. Our Founder introduced them to the Holy Father, who asked them what profession these young Africans were going to enter. When the Cardinal told him, the Pope thought that some of them should be directed towards the priesthood, if they had the vocation. That same evening seven of them left for the Junior Seminary of St-Eugène, in Algiers. 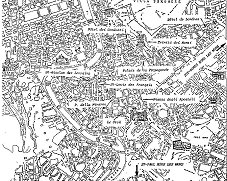 Map of Rome (nowdays) with the places where Lavigerie has been

The only railway station in Rome was on the site of the present Stazione Termini.
It was then a small station from which the Cardinal took the train for Civitavecchia, where he took the boat.

The Vittorio Emmanuele monument in the Piazza Venezia was under construction in 1888. It was in this year that part of the hill of the Capitol was flattened, as well as any other obstacle to the building of the monument.

The Forum was not, as it is today, an open-air museum, but a kind of meadow where cows came to pasture. The place was called at this period "Campo Vaccino", or Cows' Field.