Who was Benedict XV
for the Missionaries of Africa?

When Benedict XV died on the 22nd January 1922, Father Louis Burtin known in Rome as the 'Procurator General of the White Fathers of the great Cardinal Lavigerie' the same day wrote to Bishop Livinhac, Superior General, to remind him how much the late Pope had 'so loved our dear little Society'.

In fact Father Burtin was a personal friend of Archbishop della Chiesa long before he was elected Pope. This friendship made him a regular visitor to the pontifical household so much so that he was invited into the papal chambers where the Pope had just passed away 'to offer Holy Mass in the presence of his mortal remains.'

"Having already said Mass at the Procure (Via Trent'Aprile, now the Ge-neralate of the MSOLA), I cannot accept the touching offer made to me but I remain at his feet till the Camerlengo comes to make the official declaration of his death." "I was able to kneel at the foot of the Pope's bed for a final prayer. Rising, I leant over him and kissed the hand that I had so often affectionately taken into mine under preceding Pontificates and that for seven years had blessed me with tenderness."

The PE commented 'this relatively short but fruitful Pontificate (September 1914-January 1922) was filled with concern for the good of the Church and the welfare of all humanity.' The editor recalled that Benedict XV had re-established official relations with France and the Vatican and that 'he was full of zeal to extend the Kingdom of Jesus Christ among unbelievers,' and 'that he showed great favour to the Missions and Missionaries.'

'Our little Society in particular will never forget his marks of esteem and fatherly affection by which it was honoured by Benedict XV, notably in that by this dearly departed Pontiff the Baganda Martyrs were raised to the ranks of the Beatified.' Benedict XV also raised Bishop Livinhac to the dignity of Archbishop. (PE n° 100, January 1922, pp. 21-26)

Benedict XV wrote Maximum Illud, the first great encyclical on the Missions, dated the 30th November 1919. The world was just coming out of the 'Great War', the First World War that amongst other things put an end to German presence in Tanganyika, Rwanda, and Burundi. This explains the manner in which Bishop Livinhac presents the Encyclical to the confreres on the 6th January 1920 in a circular "On the Apostolic Letter of His Holiness Benedict XV concerning the mission to unbelievers. 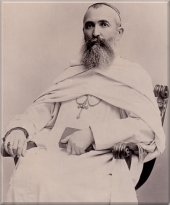 Here are some extracts of the summary by Archbishop Livinhac:

"Duties of missionaries: They should be imbued with the grandeur of their vocation. Called only to spread the Kingdom of God by winning souls still sitting in darkness and in the shadow of death, they should beware of working for expanding their earthly homeland and extending its influence. There is nothing more deplorable and more prone to diminish their prestige and instigate distrust among the people than making them think that (the missionaries) are agents of their government and not men of God. …

Therefore avoid anything that could make them suspect we envy the goods of this world and let us act so that it is clear to all that our material undertakings have no other aim than the welfare of souls.

In order to be equal to this noble task, a missionary needs to be thoroughly intellectually cultivated. He also needs to know the language of the local people, accurately and effortlessly so that not only is he understood, but listened to with appreciation, and not be obliged to depend on catechists for religious instruction, which is the task proper to an apostle: Euntes docete…(Going, teach…)

However, what a missionary needs most is holiness. Whoever preaches God should be a man of God. In order to be holy he must be faithful to prayer, in close union with God. Charity towards unbelievers should be linked to the love of God to see in them the children of God."
(Instructions, p. 242 ss.)

The friendship between Archbishop Giacomo della Chiesa and Fr Louis Burtin (1853-1942) flourished for many years before bearing full fruit when the Italian prelate was elected Pope in 1914, only four months after being made Cardinal. In 1886 Cardinal Lavigerie presented Fr Burtin, aged 33, to Pope Leo XIII as his Procurator. For more than 50 years he developed a network of official and friendly relations that enabled him to be at the immediate service of Africa in taking charge of the Cardinal's affairs, then those of the Society and its Vicariates Apostolic. At that time, the Superior General's residence was at Maison-Carrée in Algeria.

Fr Burtin died in 1942 at the age of 89 after being obliged to take to his bed for a week. Cardinals and other personalities came to visit him on his deathbed. He was interred at Campo Verano cemetery in Rome, in the vault offered to the WF by the Sulpicians. 'Fr Burtin is truly venerated in Rome.' (PE n° 330, 331, 1942, pp. 12, 42)