On several occasions in the course of his journeys from Ankara to Dakar, from Casablanca to Tunis and Damascus to Cairo, John Paul II called upon Catholics to work with Muslims so that together they may contribute to safeguarding the spiritual values of which our world has so much need. In addition they were to seek justice, a condition of peace between peoples on all continents in particular in the Near East and Africa.

It is not surprising that this attitude earned the Pope the esteem and gratitude of the Muslim world. Unsurprisingly, on the day after his death, a very great number of Muslim personalities, including the spokespersons of Hamas and Hizbullah, expressed their sympathy and spoke of their admiration for this man of God, so attentive was he to the plight of all victims of injustice, in particular the Palestinians.

On the side of Christians too a huge tide of gratitude was carried towards the late Pope. However, it has to be said that in certain Protestant, Orthodox and even Catholic circles, they are far from sharing the point of view of John Paul II on Islamic-Christian dialogue. Without going as far as the extremist positions of certain North American evangelists who still foster a crusader mentality, numerous ecclesiastics continue to look on Islam as the enemy and a 'threat to the Church'. There is therefore every reason to question what will become of the message of John Paul II on relations between Christians and Muslims.

It is true that there is still a long road to travel so that this message can be understood and lived by the whole Church on a worldwide scale. In order to be worthwhile and fruitful interreligious dialogue demands a deepening of theological thinking. It must also take greater account of national and international political realities.

Bearing in mind the first-rate work done in the Vatican by the Pontifical Council for Interreligious Dialogue but also the action led in many countries by certain bishops, priests, Sisters, and laypeople along with their Muslim friends, I am convinced that reconciliation between the Church and Islam will be one of the major realities of the 21st century. John Paul II will have consciously made his decisive contribution to this reconciliation. Where he has sown, others will harvest. 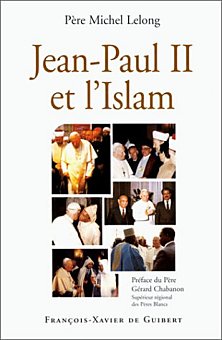 In our day is Islam a danger for Europe and a threat to the Church? Many Westerners think so. Do they know the thinking of John Paul II on the Muslim religion and on the spiritual attitude that believing Muslims could have towards Catholics? On several occasions in the course of his journeys worldwide the Holy Father addressed this question, but his teaching in this area remains little known. Here, Father Lelong presents and comments on the main texts in which the Pope calls upon Catholics to enter into contact with believers in Islam, in all fidelity to the truth of Christ.

Father Michel Lelong, Ph.D., is a scholar of Arabic language and literature. He has always been involved in Islamic-Christian relations.