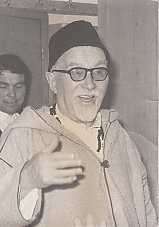 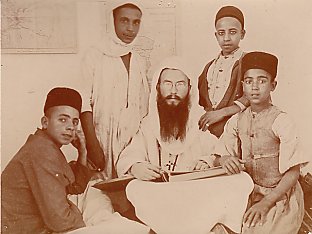 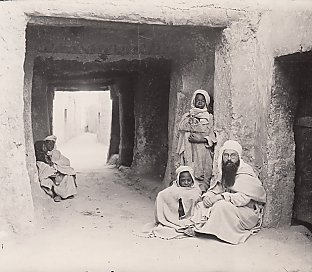 There are many treasures in the archives of the Generalate. Among them are two packets inscribed in felt pen with the words, “Fichier arabe du Père Alliaume”. Nobody, apparently, dared open these packets. Yet the old missionaries of the Sahara speak reverently about this file of index cards, which contains pearls of wisdom accumulated during more than 50 years of missionary life in the Sahara.

However, let us begin at the beginning. In 1925, when he was just 25 years old, Fr. Yves arrived in Ghardaia fresh from the scholasticate of Carthage. He was immediately seduced by his surroundings. A few months after his arrival, he wrote to the Assistant General of the time, Fr. Marchal: “I believe I love the Mzab countryside as I do the Fatherland and its inhabitants like brothers...I would like to enter into their hearts to do them some good...Alas, the more I think about this, the more I realise that I will never touch their hearts unless I know their language perfectly. Without the language, I will never understand their mentality so I will never know what to say to them and how to say it...It would be better never to have come on mission and grow old there without understanding and touching the hearts of the souls all around us.” He never lost this childish enthusiasm. He gave himself heart and soul to the study of the language to understand better the Saharan milieu and so love the people and ‘do them some good.’

Initially, Fr. Yves was asked to teach children. He did so enthusiastically, trying to teach them lessons for life. He aimed at awaking their consciences to a sense of God and His presence and a return to God by contrition. He captivated his audience by illustrating his work with pictures drawn on a blackboard. He published small booklets under the general title, “Conversations under a tent” which were quickly used by his confreres in the other oasis. They called the booklets, “little camels” because of the picture of the animal decorating the cover.

However, once the lessons were over, Fr. Alliaume went visiting the people of the neighbourhood. Right up to sunset, he visited his friends, the parents of his pupils, the poor and especially the elderly. Little by little, he acquired a remarkable mastery of the language. When he returned to the house, he noted down everything he had learnt such as proverbs, stories, poems, and anecdotes. Everything was put on an index card and memorised with the aim of using it again as soon as possible. In this way, he acquired a deep knowledge of the Arab dialect.

It was never a question of ethnological curiosity. For Fr. Alliaume it was the way to get to understand the local culture of the country and to encounter sensitively his Saharan friends at a deeper level. He tried on every occasion to transmit to them his love of God. He developed a certain spiritual complicity with the Muslims whose deep relationship with God he knew how to discern and appreciate. Very often, his conversations with them ended with a prayer.

In an article which appeared in Vivante Afrique in 1958, Fr. Yves relates how people once came looking for him telling him; “Father, you friend is sick, he is going to die.” When he arrived, the old man had already recited the prayer of the dying and had asked forgiveness from the members of his family who were gathered around him. Father Alliaume also pardoned and asked forgiveness from the old man then told those present, “We have all asked for forgiveness and he has forgiven us. That is good, but there is another One whom we have forgotten to ask for forgiveness. It is He who created us and whom we have all offended. Now, my friend, have courage, God is gentle and merciful; ask Him for forgiveness from the bottom of your heart, and he will forgive everything.” Fr. Yves finished this article by writing, “This sincere believer, who had never lost faith in God, abandoned himself to the mercy of the All-Powerful One and a few minutes later Ali’s soul returned to God.” Yves was above all a missionary, a man of God whose principal concern was to help people grow in faith in God.

No matter what oasis he found himself in, Ghardaia, El Golea, Ouargla, Tougourt, El Oued, Ain-Sefra, or El Bayadh, he kept up his hectic round of visits. He was passionate about this throughout his life. He had a gift of easy contact; his joyful character opened all doors. It is no surprise that the superiors often asked him to initiate young confreres into the language and how to approach the local people. They quickly became devotees of his school and showed him their affection and their respect by nicknaming him Chibani (Old Man). He became their teacher and mentor.

This gift for relationships was also put to work in community where he was cheerful and good-humoured. Everybody enjoyed his company and admired the rare depth of his spirituality, which was the source of his self-sacrifice and zeal. However, he sometimes demanded the same standard from his confreres as he had for himself. He was superior only once in his life and his meticulousness even scrupulosity became a preoccupation and made life impossible for the confreres. Fr. Alliaume himself wrote in a letter to Bishop Durrieu, an old classmate, “I was only superior for three years, and I had so much bile thrown at me that I caught jaundice.” Bishop Durrieu replied by calling him, Dear Father Ben Couscous!

Fr. Alliaume had many strings to his bow. He built important building such as the church in El Golea or the bell tower at Ouargla. He knew how to combine the job of architect, draughtsman, engineer and mason. He knew how to handle a trowel and was not afraid of climbing up scaffolding. On occasion, he could also be a fashion designer, creating baby clothes for newly born children in the neighbourhood. If necessary, he could even take the place of the cook but then he prepared all the meals before five o’clock in the morning so as not to lose any time for his apostolic work!

As he approached sixty, his health began to fail and he had to spend the summer months in the mission posts of the north. However, his enthusiasm never weakened. He took out Algerian nationality and began to study Literary Arabic. Finally, at the age of 78 and with a heavy heart, he had to quit the Sahara for Bry sur Marne where he died five years later.

The irony of all this is that one of the formators in Carthage when giving his appreciation of Fr. Alliaume at the time of the oath, wrote, “Bro Alliaume will be an insignificant missionary of no great importance.”