The new book of Fr. Hugo Hinfelaar,
the History of the Catholic Church in Zambia,
1895 to 1995 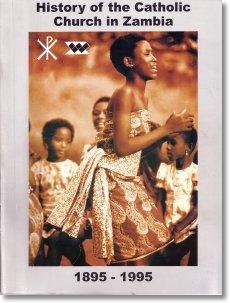 Yesterday, on 27th April 2004 at 18.30 hours we witnessed an historical event in Lusaka (Zambia).
At the premises of the Zambian Episcopal Conference the new book of Fr. Hugo Hinfelaar, the History of the Catholic Church in Zambia, 1895 to 1995 was officially launched by the Bishops' Conference, represented by Fr. Ignatius Mwebe, the Secretary General of the Conference.

The people, about one hundred in numbers, were welcomed by the Provincial of Zambia, Fr. Gotthard Rosner, who also introduced the author. It was an important moment for the church in Zambia, since Fr. Hugo's book is the first major work on the history of the Zambian church.
Fr. Hugo came to Zambia in December 1958 and spent most of his life in the North, in Mpika Diocese. He worked in several parishes and was also Rector of the Catechists' Training Centre at Mulilansolo.
In 1971 he came to Lusaka and founded the parish of Bauleni. He also became the Secretary of Archbishop Milingo.
In 1982 Fr. Hugo went to London in order to study Anthropology at SOAS and received his M.A. a year later. From 1983 to 1988 he taught at the Language Centre of Ilondola, and then went back to London for his Ph.D. that he obtained in 1989.
From 1989 to 1993 he taught Anthropology and ATR. at Mpima Major Seminary. In the same year he fell seriously sick and had to go back to Holland for treatment. When feeling better he taught Anthropology at the Missionary Institute London.
We were fortunate to have him back in Zambia as a resource person for ZEC. and the M. Afr. since 1996. He also takes care of the Archives of ZEC and the one of the Missionaries of Africa.
In 1999 Archbishop Mazombwe, then Chairman of the Zambian Episcopal Conference, asked Fr. Hugo Hinfelaar to write a book one the history of the Catholic church in Zambia.

In 1891, three French White Fathers of the Society of the Missionaries of Africa pitched their tents near Mambwe Mwela, along the Stevenson Road in the utmost north of today's Zambia. This was followed, in 1895, by the foundation of their first mission post at Kayambi, near Chief Makasa. In 1905 two French Jesuits arrived from the south and founded Chikuni, near Chief Monze and Kasisi, near Headman Lusaka.

This book traces one hundred years of the history of the Catholic Church from its humble beginnings until its establishment as one of the mainline Christian Churches in Zambia.

After the upheavals of the First World War, missionaries from other congregations arrived in the 1930s. They consisted mainly of the Conventual Franciscans from Italy, who settled in the emerging Copperbelt, and of Capuchin Franciscans from Ireland, who founded mission posts in Livingstone and Barotseland.

The Second World War was another set back, but when it was over another wave of missionaries arrived from many parts of the world, especially after Zambia's Independence in 1964 and after the close of the Second Vatican Council in 1965.

The aim of establishing a sustainable local church community proved to be a long process which culminated in the visit of Pope John Paul II in 1989, and the celebration of the Church's centenary in 1991. Hugo F Hinfelaar, MBE, the author of this book, came to Northern Rhodesia in 1958, and worked as a White Father missionary in the Northern and Central Provinces. After graduate studies at the Institute of Social Studies in The Hague, and an MA from the School of Oriental and African Studies at the University of London, he obtained a doctorate with a thesis entitled Religious Change among Bemba-speaking Women in Zambia which was subsequently published. He has contributed articles to various local and international magazines and works as a resource person and archivist for the Zambia Episcopal Conference.

This book s a contribution to the country's religious-cultural identity and aims a being a reference book for church workers.